Black Blood of the Earth (beverage) 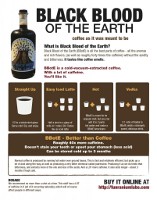 Black Blood of the Earth (BBotE) is a coffee product made by steeping coffee grounds in cold water for a day or so, then vacuum extracting. The long steep is supposed to bring out some of the oil-based flavors that normally get left behind in drip coffee, and the cold temperature is supposed to prevent some of the bitter flavors that come from heat damage. The process also gives it much more caffeine than normal coffee, making it something of a "coffee concentrate" that supposedly, quote unquote, "tastes like coffee smells". The recommended serving size is 1 shot (1.5 US fl. oz., 45 mL).

(The name comes from a line of dialogue in Big Trouble in Little China.)
I'm not a fan of straight black coffee, but I do like coffee when combined with other flavors. I'd been hearing about BBotE around the Internet for a while, and found the idea intriguing, so I decided to give it a whirl. I bought a 750mL bottle of the Columbian variety, whose previous batch had been described by tasters as having chocolate notes. When the bottle arrived, it was cool but not actually chilled.


Overall verdict: nice but overrated. Worth trying if you already like coffee, but you're not missing something amazing. Score: 3 stars out of 4.

P.S.: The caffeine numbers on the website don't add up. The BBotE site claims it contains 40 times the caffeine of drip coffee and recommends limiting consumption to 100mL per day. The caffeine content in a 200mL serving of drip coffee varies a lot, but the site cites 120mg, which Wikipedia agrees is reasonable (if lowball). That's 600mg/L. Assuming the "40 times" figure is by volume, the site implies 24000mg/L of caffeine in BBotE. That's 2400mg of caffeine per 100mL daily consumption limit (45 cans of Mountain Dew), or 1080mg of caffeine per 45mL serving size (20 cans of Mountain Dew). There is no freaking way that's actually true: that's enough caffeine to put someone in the hospital (although not actually kill them). Based on how my own body reacts to caffeine, I estimate that BBotE contains maybe 100-150mg of caffeine per 45mL serving (2 or 3 cans of Mountain Dew). That puts it at roughly 4 or 5 times the caffeine of drip coffee by volume, which is a much more believable figure.
Posted by Unknown at 10:57 PM 1 comment:

A while back, my friends and I started doing a weekly movie night via Netflix, and it occurred to me that I ought to write down my opinions of the movies we'd seen.
My rating scale:
This scale makes no claims about the actual artistic merits of the movie, only about how likely an audience is to have a good time while watching it.